Kaolin Capital of the World

Fortunately for Washington County, a new industry emerged just as cotton was declining. Mining for kaolin, white clay used in hundreds of products including paper, paint, plastics, ceramics, food, and medicines, began in Middle Georgia in the early 1900s.

The origin of kaolin can be traced to the Cretaceous geologic period, about 70 million years ago when dinosaurs roamed the earth and much of the southern half of Georgia was covered by a great sea. During that period the climate was more tropical than now. The seacoast stretched across Georgia from Columbus to Macon to Augusta along a line that we now call the "Fall Line. About 50-56 million years ago the weathering of the rocks of Piedmont generated large volumes of kaolinitic clays, quartz sand, and mica, as well as minor amounts of other minerals, especially iron and titanium oxides, such as limonite and anatase. Feldspar, a major component of granitic rocks such as those at Stone Mountain near Atlanta, is considered the parent material for most of Georgia's sedimentary kaolin.

50 to 65 million years ago washed into rivers and streams, the weathered clays and sands of Piedmont were transported and deposited in swamps, marshes, and lagoons near and along the coastline of the ancient sea. Iron and titanium oxides were often deposited along with the kaolin, contaminating and making much of the kaolin unusable for commercial applications.

Changes in the sea level interrupted the sequence of erosion, transportation, and deposition of kaolin from Piedmont, but the process continued for some 30 to 35 million years. The last invasion of the land by the great sea deposited huge amounts of red and brown sands and clays over the kaolin deposits. These later sediments formed the characteristic red hills of Middle Georgia. The commercially mineable kaolin deposits are found in a relatively narrow "belt" along the Fall Line. The kaolin mining industry has located its processing facilities in the communities near the deposits, primarily in the nine rural counties between Macon and Augusta. Highly technical equipment and processes are employed to transform the crude kaolin into high-quality products which are marketed around the world for a wide variety of applications. 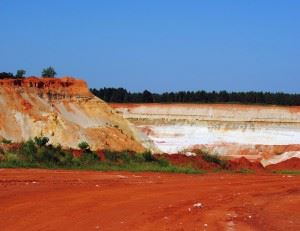 The industry grew as the North American paper and paint industries grew. Today, the product line has diversified and serves over NNN industries including ceramics, pharmaceuticals, plastics, catalysts, and building materials. During its peak in the mid-1990s, over 4,500 middle Georgians worked in the industry. Washington County provided a friendly business environment, plentiful labor, and other natural and business resources that made the industry huge to the county and to Georgia. Many more thousands worked in supporting the industry in trucking, rail service, construction, maintenance, and other service and retail businesses. Washington County retail establishments grew and today Washington County is a regional shopping area that attracts customers from nearby counties and a stopover for people traveling through the county.

Kaolin is still the major economic driver in the county today. An annual Kaolin Festival celebrates the importance of the resource. At the end of the twentieth century, kaolin was an $800 million business and Georgia's largest volume export.

However, the kaolin industry had begun a decline by the end of the 1990s. County leaders worked to aggressively pursue diversifying the industrial base, planned improvements to its infrastructure, and sought to improve and expand educational opportunities. Protecting and supporting the kaolin industry and attracting new businesses and visitors to this historically rich and diverse county were now priorities.